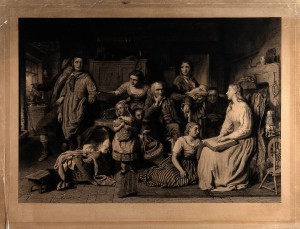 Light and Darkness, an engraving by W. Ridgway after a painting by George Smith (1871). The image shows a blind girl reading the Bible by touch to her family. Wellcome Library, London.

Braille, the most common raised finger alphabet in use today, was developed in the 1820-30s, but not used extensively until the end of the nineteenth century. Rather, the rapid spread of ‘tangible typography’ (as the educator Edmund C. Johnson termed it in 1853) across Europe and America was at first marked by fierce debate as to whether it should be based on the Roman alphabet (and still legible to the eye) or should adopt an arbitrary, symbolic system more suited to the perceptual faculties of the finger – like braille.

A system based on the Roman alphabet was advocated by some on the grounds it would be easier to learn by people with acquired sight loss with literacy skills, and because of its convenience for sighted teachers. Significantly, blind people became increasingly active in debates concerning the form embossed reading should take. In the late 1860s a group of blind men led by Thomas Rhodes Armitage formed the British and Foreign Society for Improving the Embossed Literature of the Blind, and began their investigation into the most effective embossed systems available. Their guiding principle was that ‘the relative merits of the various methods of education through the sense of touch should be decided by those and only by those who have to rely upon this sense.’

Armitage and his colleagues’ endorsement of braille contributed significantly to its widespread promotion and use in British and European institutions from the 1870s onward. However, whilst its status as the dominant raised print format was rapidly established, not all blind and visually impaired people were braille-literate. In the twentieth century, innovations in sound recording technology made the development of recorded books an alternative possibility. 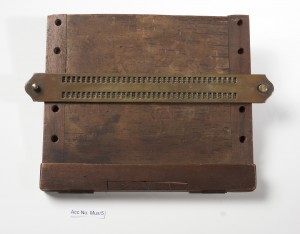 Heather Tilley discusses debates between different inventors, and charts the rise of braille, in these two short videos:

Please follow the links in each item for more information where available. The information provided includes historical information about different raised print systems and their inventors; object descriptions; and illustrations.

The Gospel According to Saint John, edited by T. M. Lucas (Bristol: Bristol Society for Embossing and Circulating the Authorised Version of the Bible, 1837). Lucas type. RNIB Collection

James H. Frere, Directions for Teaching the Blind to Read, by the Combination of Elementary Sounds. Pamphlet (c. 1841).

George A. Hughes, The New Punctiuncula Stenographic System of Embossing by Which the Blind of All Nations will be Able to Emboss for themselves […] (London, 1843). RNIB Collection.

William Moon, Light for the Blind: A History of the Origin and Success of Moon’s System of Reading (Embossed in Various Languages) for the Blind (London: Longmans & Co., 1873). Private collection

The Queen’s Journal: Life in the Highlands: In Type for the Blind (Brighton, 1871). Moon type. RNIB Collection